“Don’t be satisfied with how things have gone with others.  Unfold your own myth.”  -Rumi


In earlier posts I talked about beginning a creative project, and maintaining focus to keep it going.  If we can do these two things we will eventually COMPLETE the project.  This can be a mixed blessing.  On the one hand there is the satisfaction of a job, hopefully, well done.  But on the other hand, if the project was enjoyable, there is a bit of sadness at moving on to the next project or, more realistically, moving into marketing-mode to make the completed project available for others to discover and enjoy.  I have reached this point in my current recording project, and will now look back on the mixing, mastering and final recording sessions.

I was back at Cloud9 Recording in April mixing my CD with Joe Napoli.  Each song had many tracks of guitars, drums, vocals and keyboards to mix down.  I am VERY pleased with the results.  Over a five day period Joe worked very hard creating great mixes of the nine songs for this CD.  Despite that aggressive schedule Joe tuned in to the story and message of each song so that he could bring out the best in my musical arrangements while mixing.

After mixing, mastering is yet another necessary process where the wrong mastering engineer can ruin all of the hard work done in recording and mixing, but the right mastering engineer can polish up those final mixes and boost them to an even higher level.  I was fortunate to meet and work with a talented engineer named Rob Ray who fits the latter category.  Like Joe Napoli, Rob took a keen interest in my musical intent for each song individually and the project as a whole.  He did an outstanding job mastering the project and I am EXTREMELY pleased with how warm and alive the music sounds, and with how well the individual songs hang together as a whole.  I still need to settle on photos and graphics for the actual CD,  but I am close to having a final audio artifact to share with you.

I will now backtrack a bit since I never blogged on the vocal sessions.  The lyrical topics of the nine songs range from politics to family, from love songs to matters of the spirit.  Inhabiting each of these songs as a vocalist requires concentration on my part, and a great headphone mix from the engineer so that I can hear my voice placed appropriately with the instruments.  Joe Napoli provided excellent headphone mixes so it was up to me to vocally communicate these songs.  I think I turned in good performances of all the songs, and I even did some of my own backing vocals.  One song, "A Girl of Nineteen", is sung by Kathy Fleischmann.  I was inspired to write the song after reading transcripts of the trial of Joan of Arc and also inspired by the wonderful painting of Joan by Bastien-Lepage that hangs in the Metropolitan Museum of Art in NYC.  Kathy gave an outstanding lead vocal performance, she really communicated the emotional range the song required.

A book called The Mole People by Jennifer Toth inspired my song "Nobody's Friend".  The book is a collection of interviews and personal stories related to time the author spent with a sub-community of New York City that lives underground in abandoned subway tunnels and stations, sometimes rarely coming up to the street.  With many years of day jobs and late night music gigs in NYC I thought I had seen and heard everything but this book left a strong impression of a troubled community I hadn't been aware even existed.

The sad state of a democracy that was once 'for the people' but now seems to be 'for whoever has the deepest pockets to buy representation' inspired my song "Follow the Money".  These days it seems the only way to make sense of military deployments, budget decisions, and federal policy is to follow the money trail and see which individuals or corporations are benefiting from these decisions.

Not to worry, the entire CD is not me ranting on serious subjects.  There are also some love songs like "Sympathetic" and "Sacred Place", and songs about family like "Brooklyn, 1964" and "Rise and Shine". Kathy Fleischmann and another friend, Lakita P. Jackson, sing excellent backing vocals on "Follow the Money", "Rise and Shine', and "Nobody's Friend".  Kathy also sings with me on "Brooklyn, 1964". 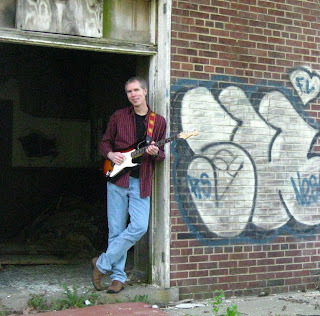 That sums up the recording and mixing process for this CD.  I will soon be creating a facebook 'fan' page where I can post some songs, and communicate gigs once I put together a band to play this music live.  I will also alert you to where songs and physical CDs can be purchased and/or pre-ordered.  I am in the process of redesigning my website to make all of this easier as well.  Many thanks to all of you who have read this blog and kept up with the sessions - I hope you get to hear the completed CD and perhaps The Kevin McLeod Band playing the music live when we come to your town!
Posted by KMcLeod at 12:55 PM No comments:

KMcLeod
I've been a working musician for many years, playing and writing Rock, Jazz, and Acoustic music. I have a great deal of performing and recording experience. Please visit my website to learn more about my music.

Music has extraordinary transformative power, both for the musician and listener. It's what I'm always trying to tap into, regardless of the musical style or setting.

Music is my favorite subject to talk about. I will use this bog to address music related topics.